With the United States’ entrance into World War II following the attack on Pearl Harbor on December 7, 1941, propaganda became ubiquitous on the home front as the process of rallying the American war effort began. Posters of Uncle Sam and Rosie the Riveter became synonymous with the redoubtable American spirit of optimism and determination. World War II was not simply the war of the soldier, but of every man, woman, and child in the United States, and each individual was expected to do their part in the fight. 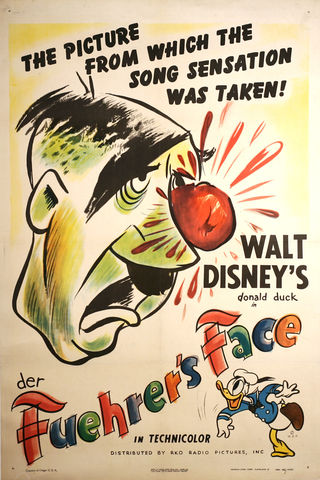 Walt Disney and his staff were no exception, and with The Walt Disney Studios commandeered by the military on December 8, 1941, they soon found themselves entrenched in the ongoing war effort. Of the dozens of training, propaganda, and educational films Walt and his staff made over the next four years of the war, none reached the popularity of the Donald Duck short Der Fuehrer’s Face (1943), in which the irascible duck takes on the role of a munitions factory worker in “Nutzi Land.” Released on January 1, 1943, the film received national approbation, and the titular song—recorded before the short’s release by Spike Jones & His City Slickers—became a sensation. In time, the film would be translated into numerous foreign languages, with various clandestine groups who opposed the Third Reich—known communally as the Underground—smuggling it into Europe. It would even go on to win an Academy Award® for Best Short Subject (Cartoon), the only Donald Duck short to achieve the honor.

Walt himself would later recall the popularity of the film in an interview with the Saturday Evening Post’s Pete Martin.

“[Der Fuehrer’s Face] was the most popular propaganda film we had. It was put in all languages […] They had it in the Underground. The Underground were running it and were getting a good laugh out of it while they were under the heel of Hitler, you know?” 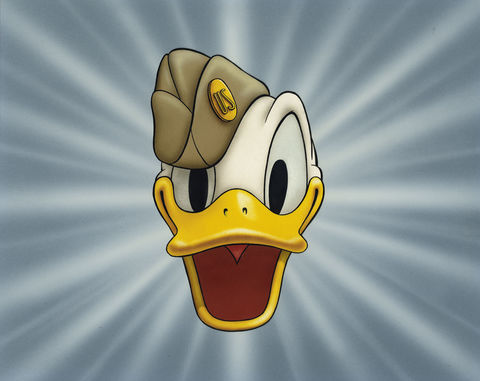 To produce the film, Walt called upon many of the Disney Studios’ best. Directing the short was Jack Kinney, known for his work on both Goofy and Donald Duck shorts, and the story artists assigned to the project were Joe Grant and Dick Huemer, whose prior work together included story work for Fantasia (1940) and writing the screenplay for Dumbo (1941).

The film’s goal to deride and condemn the evils of Nazism is far from subtle in its approach. Visually, the film is loaded with references and symbolism which help decry the pernicious Nazi tenets. Toward the beginning of the short, Donald is awoken by a Nazi alarm clock in a room with swastika wallpaper featuring framed caricatures of Axis leaders Hitler, Hirohito, and Mussolini. As he rises for the day, his first order of business is to salute these images. Outside his room, a German band singing “Der Fuehrer’s Face” is comprised of caricatures of Third Reich leaders Joseph Goebbels, Heinrich Himmler, and Hermann Göring, as well as Japanese Prime Minister and Minister of War Hideki Tojo. Donald is even given a copy of Hitler’s infamous Mein Kampf and told to “improve the mind.”

Donald’s job is then revealed, working “48 hours a day for the Fuehrer” at an ominous looking German munitions factory. As he screws the tops onto munitions, he must of course be constantly ready to salute any pictures of Hitler that happen to be on the assembly line. His only break is his “vacation with pay” of standing and exercising “to build up the body so [he] can work harder for the Fuehrer” in front of a torn and patchy painted backdrop of the Swiss Alps. Naturally, he is “chosen by special decree of the Fuehrer” to work overtime. The end result is that, unable to take the stress, Donald eventually loses his sanity in “Nutzi Land.”

As the film draws to a close, Donald wakes up from what turns out to have been a nightmare. Free from the cruel and harsh conditions of “Nutzi Land”, we see him in his real room, which is decorated from top to bottom in Americana. Overjoyed as he realizes he is in the United States, he jumps out of bed in his stars and stripes pajamas and rushes to the windowsill to look out. There, he kisses a miniature Statue of Liberty and, in words emblematic of the fervent patriotism of the time, he proudly states, “am I glad to be a citizen of the United States of America!”. 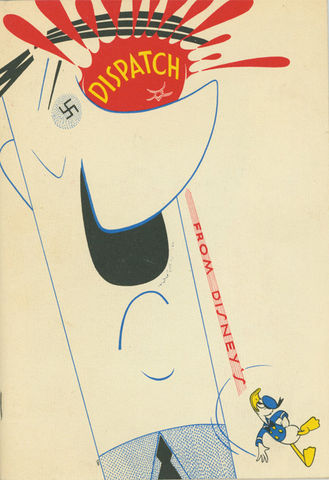 All of these gags resonated strongly with Americans who, at the time, had been engaged in the most devastating war in modern history for over a year. When the film was released in January of 1943, the war’s outcome was still anything but certain. It would remain that way for another month, at which time the Soviet Union’s triumph over Hitler’s Wehrmacht in The Battle of Stalingrad—which raged from late August of 1942 to early February of 1943—made the inevitable outcome of the war much clearer.

Though it is impossible to definitively assess the role Der Fuehrer’s Face had in lifting American morale during the war, the strong sales of the titular song, the film’s overall popularity, and its infiltration into Europe and Russia imply its impact. Kinney later recalled in 1973 that the film “went to all the army camps” and noted that “the Russians bought a lot of prints… It was a put-down of Hitler, and he was pretty high at that time, you know. It served a good purpose, even though it was propaganda, it really did.” Jack Cutting, in charge of preparing Disney films for international distribution, recalled the process of translating Der Fuehrer’s Face to Russian in a 1972 interview: “We had Clarence Nash, who did the voice of Donald Duck learn the Russian lines phonetically and then deliver them in the Duck voice.”

Today, Der Fuehrer’s Face (1943) represents an important glimpse into not only the role of The Walt Disney Studios in World War II, but also the American psyche throughout the war. It embodies the strong patriotism of Walt and his staff, and a statement to the world about American values.

Image sources (in order of appearance):