Virtual Storytime | Star Wars: I Am a Padawan with Author Ashley Eckstein

We invite you and your family to celebrate Women’s History Month with a Virtual Storytime of Star Wars: I Am a Padawan with Actress and Author Ashley Eckstein. In this special presentation, learn about Eckstein’s path to bringing the story of Star Wars’ Ahsoka Tano to readers around the globe.

Registration for this program will open to the public starting Wednesday, March 3 at noon.

Attendees may purchase Eckstein’s books I Am a Padawan and It’s Your Universe, You Have the Power to Make It Happen from our webstore. All copies will come with a signed bookplate from the author. Attendees are also encouraged to register to attend Eckstein’s Virtual Talk, Building an Empire: Creating Her Universe with Actress, Author, and Entrepreneur Ashley Eckstein, Moderated by Voice Actor Bret Iwan at 1pm PT. 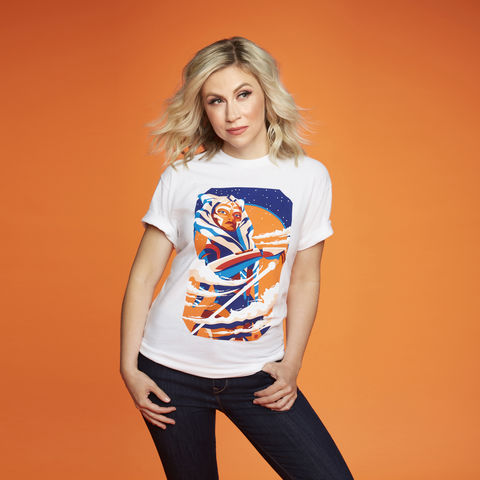 Ashley Eckstein has been widely recognized and honored as an actress, entrepreneur, author, and Fangirl trendsetter. Most known as the voice of Ahsoka Tano in Star Wars: The Clone Wars, Eckstein also founded Her Universe in 2010—the groundbreaking fangirl fashion and lifestyle brand. A leading authority on female fandom, Eckstein has been featured on CNN, Forbes, Entertainment Weekly, New York Times, Los Angeles Times, and the Wall Street Journal, among many others. She was a speaker at Fortune's Next Gen Most Powerful Women Summit, and was chosen by Good Housekeeping magazine as one of their “25 Awesome Women” and by CNET as one of their “Women Who Inspire.” Eckstein is married to former Major League Baseball player and 2006 World Series MVP, David Eckstein.

Ashley Eckstein’s book, It’s Your Universe, You Have the Power to Make It Happen, is an inspirational guide on how to make your dreams come true. She shares her own life lessons as well as lessons from iconic Disney characters, as a roadmap for how to dream it and do it.